I’m woefully behind in my blog postings….sorry everyone! It’s been difficult to find the time to sit down, go through pictures, and collect some coherent thoughts. By the time I get to my room, my comfy bed looks a lot more inviting than the hardback chair in front of the laptop. 🙂

Last night was the first competition for the Jumpers and the stands were packed. As you probably all know by now, Team Canada did a superb job with Mac and Eric jumping clean, Jill with 1 time fault and Ian with an unlucky rail (looks like In Style barely tapped it with his hind hoof). I was surprised to see that a lot of the jumping powerhouses had faults (either rails or time or both). I’m still trying to figure out how the different jumping classes work and I’m pretty sure that last night was to determine a) who qualified for the nations cup and b) the order of go. So I don’t think that the faults carry forward which is too bad in a way because Canada is tied for second with Brazil and Switzerland! Canada will be second last in the order of go for tomorrow night’s team competition with the USA being the last. If last night was anything to go by, it should be an incredible competition.

a wide look at the visually beautiful course

interesting that the jumbotron would onlly show the Beijing Olympic logo during a jumper round yet for dressage it shows live footage of their test and scared many a horse as a result......does not seem too fair to me 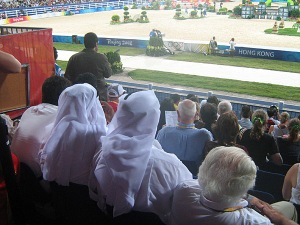 Saudia Arabia had a full team competing and there were also individuals representing United Arab Emirates, Jordan and Egypt.

on deck at the ingate. In the bottom right corner is US dressage rider Debbie McDonald and her groom Reuben

lots of fans out!

a Hong Kong flag in the midst of a packed stand

an example of the beautiful Chinese-themed decorations

one of the many ringside tv cameras

Prince of Saudi Arabia checking out the Showjumping action. Saudia Arabia had a full team competing.

everyone in full concentration mode....including my hero Mark Todd. Sadly the Kiwis had a tough go that night with one rider crashing through a jump and another racking up 47 faults. 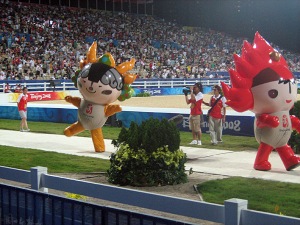 the half-time show! They might look goofy, but they never fail to get people rushing up to take their pictures. I can

Eric Lamaze and Hickstead were in superb Olympic form with a clear round. 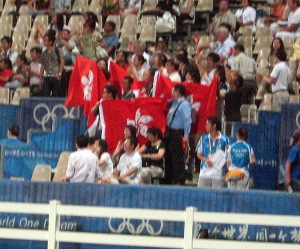 some more Hong Kong fans. When Patrick Lam clinched a clear round, the place erupted in deafening cheers and applause. It was quite something! Patrick was so excited that he threw his helmet up into the air and was doing some major fist-pumping in celebration. 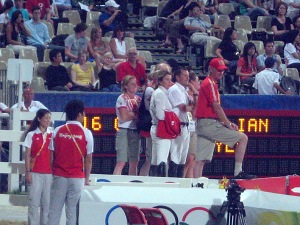 Team Canada on the podium to watch Ian Millar 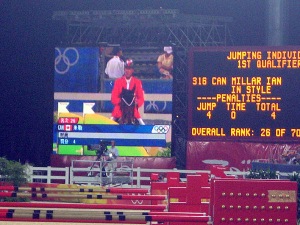 Ian and In Style looked fantastic with one very unlucky rail....looked like In Style barely touched it with the hindfoot.

capturing all the action for television viewers around the world

My trip to see the Big Buddha on the hill