Yep, you heard it right. Ashley made history tonight by becoming the first Canadian dressage rider to make it into the Grand Prix Freestyle…..the top 15! It was a real nail-biter of a night and I can honestly say I haven’t seen dressage this exciting my entire life. In honour of tonight’s exciting showdown and to show my Canadian spirit, I wore the infamous pyjama pants complete with tattoos on my cheeks (face that is!)

The setting was perfect for a great night of competition. The evening was cool with a nice breeze and a full moon. Perfect. The first surprise of the evening was a last minute withdrawal of Imke Schenkel-Bartles and Sunrise. They were replaced by Australia’s Hayley Beresford and Relampago. The beautiful black Lusitano stallion had the biggest neck I’ve ever seen but boy was he elastic! His passage was incredibly impressive and his legs stretched sideways forever in sweeping half-passes. Lovely.

the infamous cartoon horse! the bane of many a rider and horse

the judges take their positions 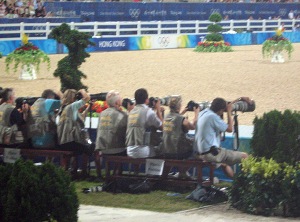 ....and the media take their positions

a full moon rising over the international flags

check out those lenses! 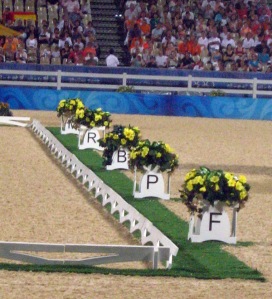 the look of sheer determination.....

USA rider Steffen Peters and Ravel put in a gorgeous test and earned 71.80%. This pair were a real treat to watch and Ravel was one of the most elastic and flowing horses there.

Sjef Janssen watches from the podium as Anky and Salinero take the stage. 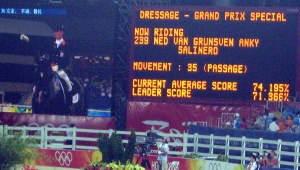 Salinero did not seem to have the same elasticity and flow as Ravel or Satchmo....and unfortunately broke twice in the second trot half-pass

British rider Emma Hindle put in a solid performance on Lancet to earn 70.440%. The Hanoverian stallion was the former ride of Schellekens-Bartels but was sold to Hindle following the 2004 Athens Olympics.

one German rider goes in while the other goes out...Isabell Werth passes teammate Heike Kemmer on the way to the ring.

Isabell was having the ride of her life, working on a record breaking score. At this point, her average was over 83%! It was obvious that they were in a league all on their own.

Isabell's 83% stayed until the first piaffe when Satchmo all of a sudden hit the bit and flew backwards. It was scary because it almost looked like they were going to leave the ring at C! Luckily Isabell was able to get things back on track but it was costly and dropped their score substantially. But they still won the test....it really was an unbelievable test with out of this world half-passes and transitions. Wow.

the media scrum for Heike and Isabell 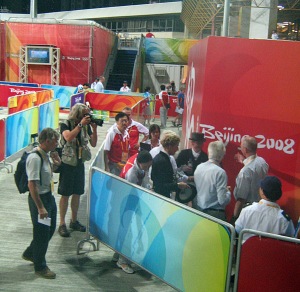 Heike and Isabell try to make their way through

time to get to bed after a superb night of nailbiting dressage. Notice the rings in the background getting doused by a very high-powered and far-reaching sprinklers

Some random memories on tonight: hearing the cameras click in unison during the two-tempis; hearing the crowd reaction every time a horse happened to poop while doing his test (judging from their reaction, you would think that the horse/rider should be given extra points!); being on the edge of my seat not only during Ashley’s ride, but every ride after until she had the 15th position secured (man was that ever stressful for me!); marvelling in Steffen Peters’ amazing ride on Ravel…easily the most visually striking combination in the ring that night; being absolutely wowed by Isabell and Satchmo and their technical prowess in the ring – they were the definite masters tonight even with their bobble.

My trip to see the Big Buddha on the hill

Party at the hotel!