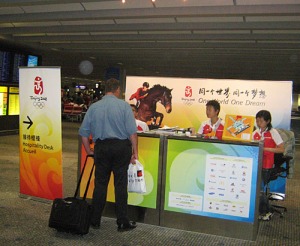 Hospitality Desk at the airport

The flight was 15 1/2 hours long, and it felt every minute of 15 1/2 hours long……but I finally made it to Hong Kong. I think Mike was worried that I would leave gouge marks in his arm, and was pleasantly surprised to find that his arms were mark free. Travelled beside a woman who has been teaching in Singapore for the last 5 years and regularly makes the trip back and forth. She had to transfer in HK to another flight which was 4 hours. Yikes!

Pictured here is the hospitality desk that is located right before customs. If you are coming to HK, I recommend that you stop here as they are extremely helpful and want to make sure that everyone is greeted properly. The accreditation area is right behind them in a white tent. We had 2 very nice girls who personally escorted us to the accred. area, took us through the express lane in customs, made sure a shuttle bus was waiting for us and escorted us to the bus. Now that is service! The bus still had that new car smell and we were the only customers. 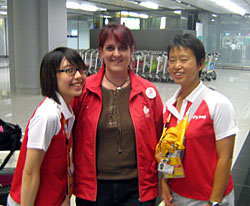 Our friendly helpers from the hospitality desk

The bus took us straight to the Regal Riverside Hotel where I am staying. Mike also stayed the first night as the Olympic Village hotel was not opening until the next day. The Regal is where media is staying, plus there will be some athletes and grooms as well. I think we were just about the first to arrive as we didn’t see anyone, although Graeme Thom (Eventing’s chef) and Debbie (Eventing’s stable manager) arrived on the 23rd and are also staying at the Regal.

Time to check in, freshen up, then meet with Graeme to get the lowdown since he and Debbie had already been to the venue. Next it was grabbing something to eat and heading back to the airport to meet 3 of the Eventing grooms who were flying in ahead of the horses. 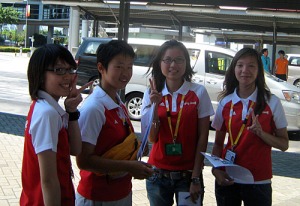 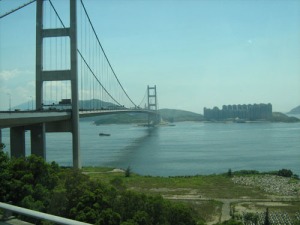 series of bridges from the airport which light up at night 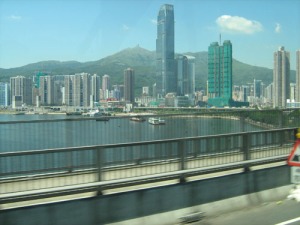